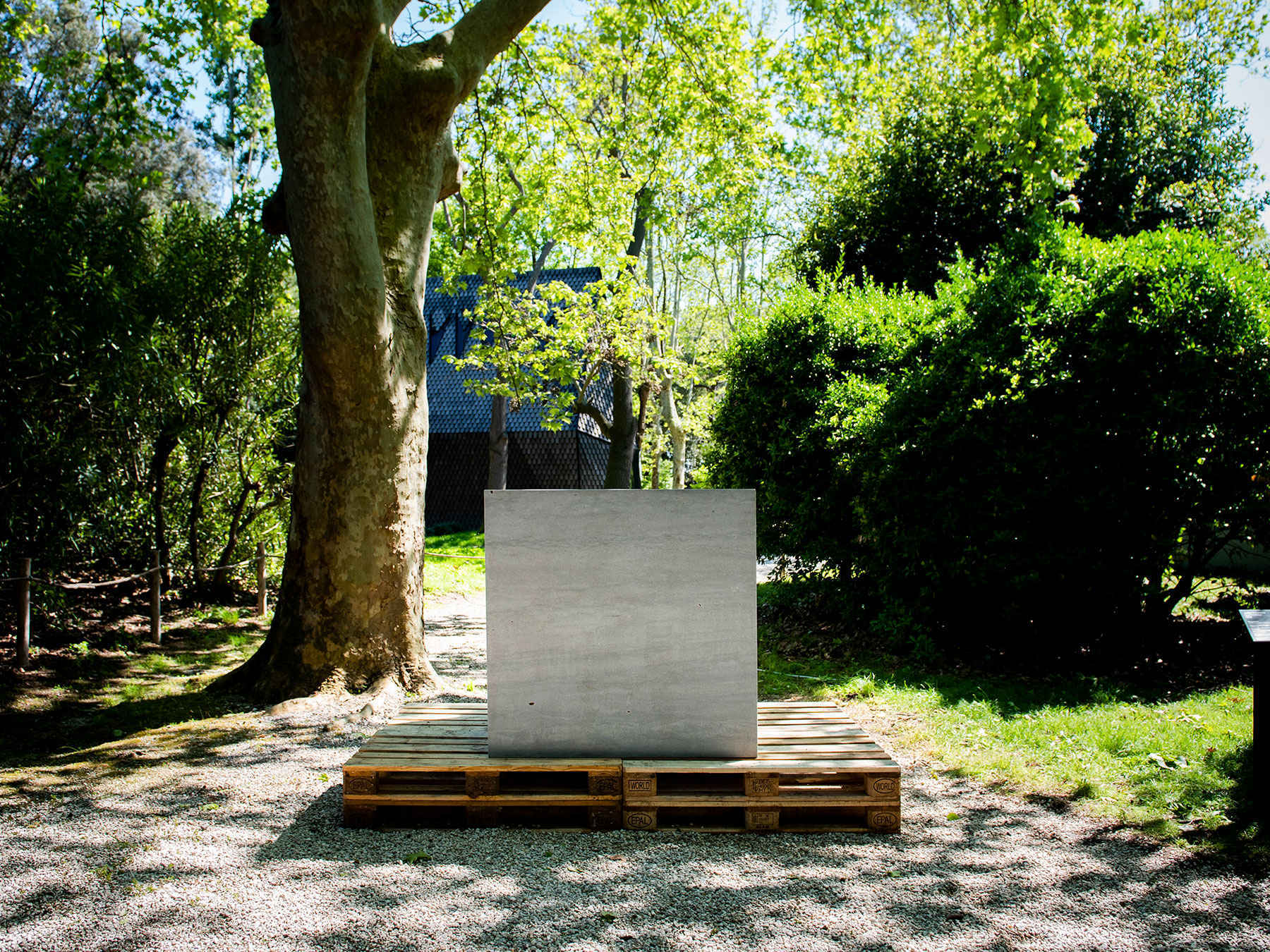 In 1957, Bruno Munari designed the famous Cube Ashtray for Danese Milano. Originally conceived to be produced in two different dimensions (6x6x6 cm and 8x8x8 cm), it was built out of melamine and anodized aluminum. In 1966, nine years after Munari, Judd began a creation process of minimalist cubic sculptures that lasted for several years.

Julião Sarmento was interested in the contamination of these two realities. His project for Expanded is a reconstruction of Munari’s ashtray, but with the dimensions of Judd’s first cube. However, unlike these examples, Sarmento’s piece is made out of limestone and complemented by a base comprised of wood pallets, which here are elevated to the status of artwork.

Forgive me for the historical inaccuracy and blatant speculation, but what interested me the most in this piece was Donald Judd’s eventual perspective of Bruno Munari’s CUBE ashtray. The transformation of the ingenious functionality of a design object into an already historical sculptural postulate. This piece’s working title was Munari/Judd. I then decided to go for the designation of the beautiful stone that materialised it and tried to recover its lost functionality by reusing the pallets that transport it. Julião Sarmento 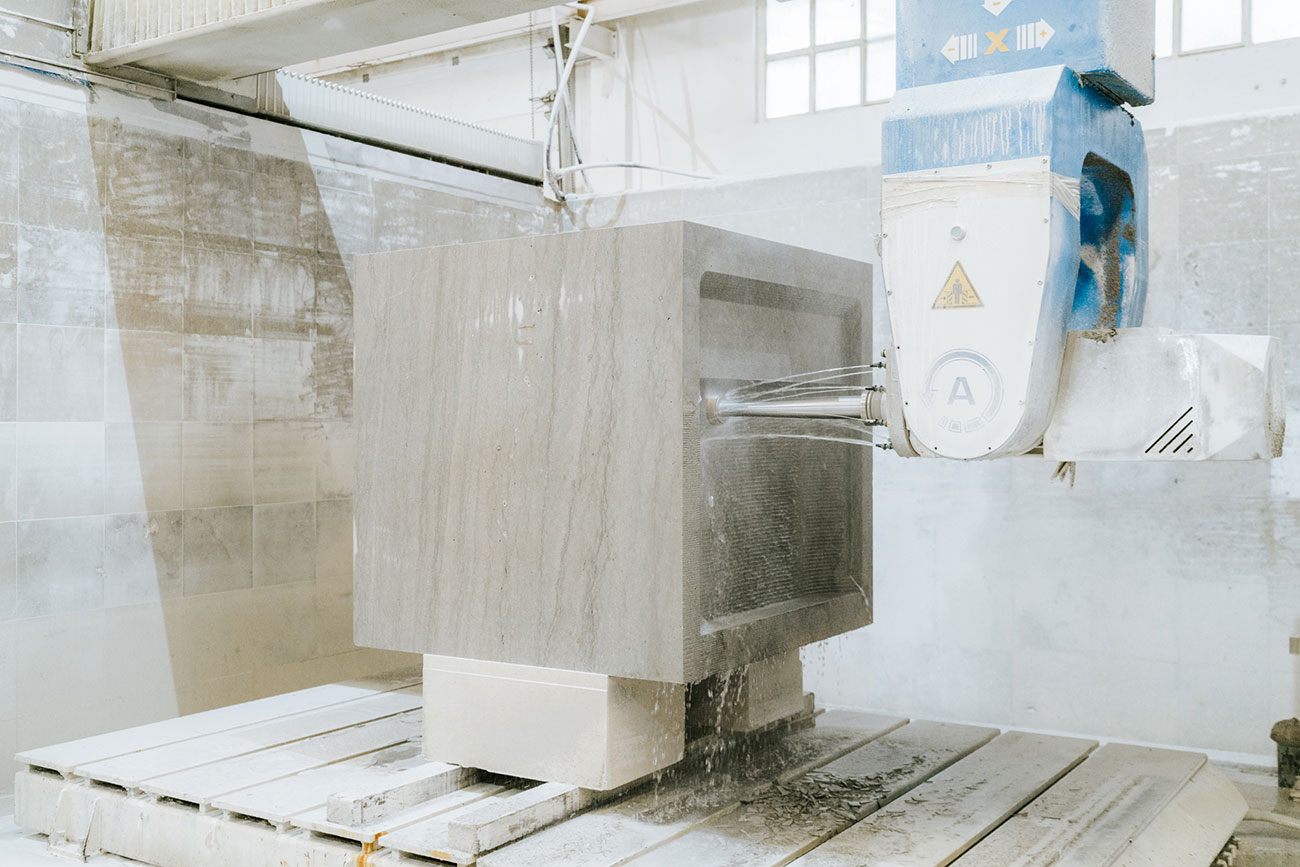 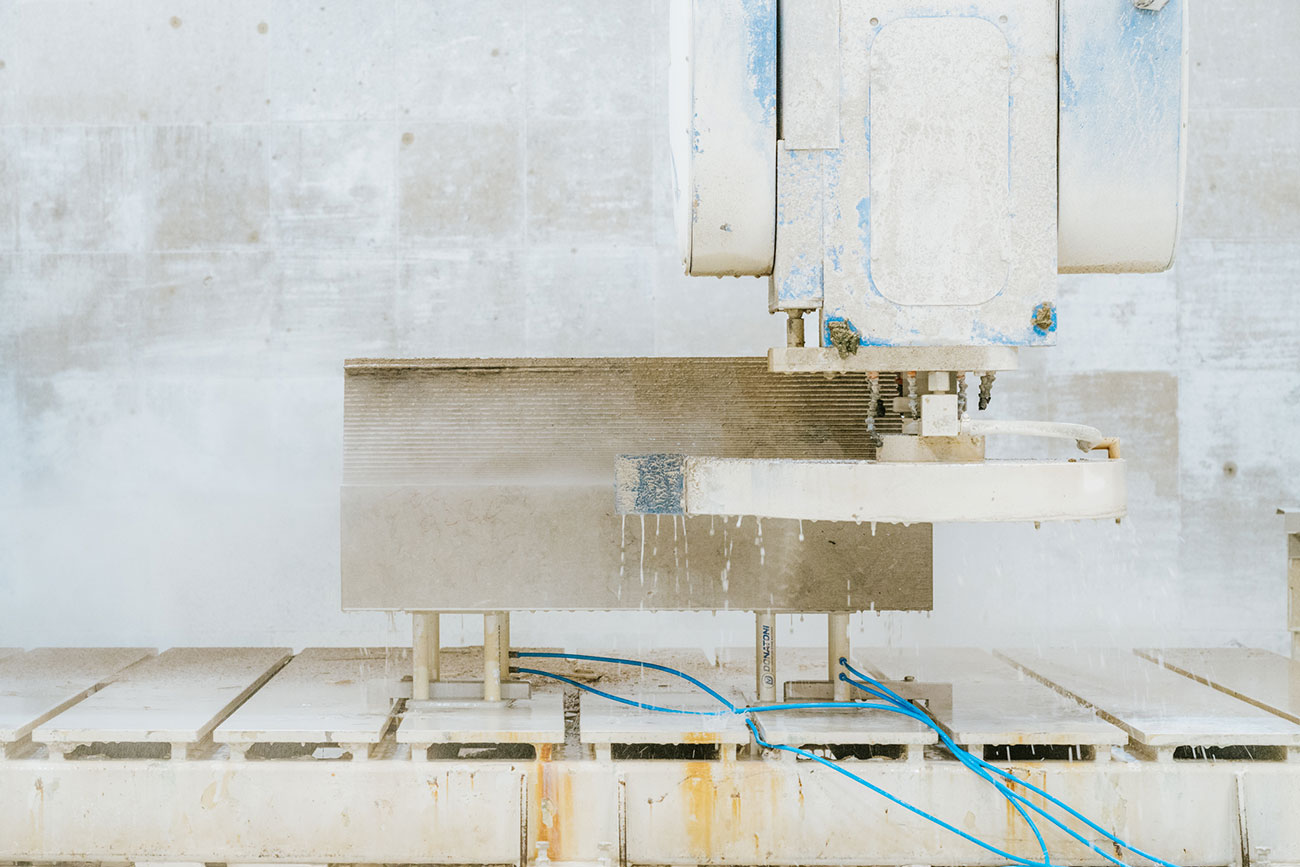 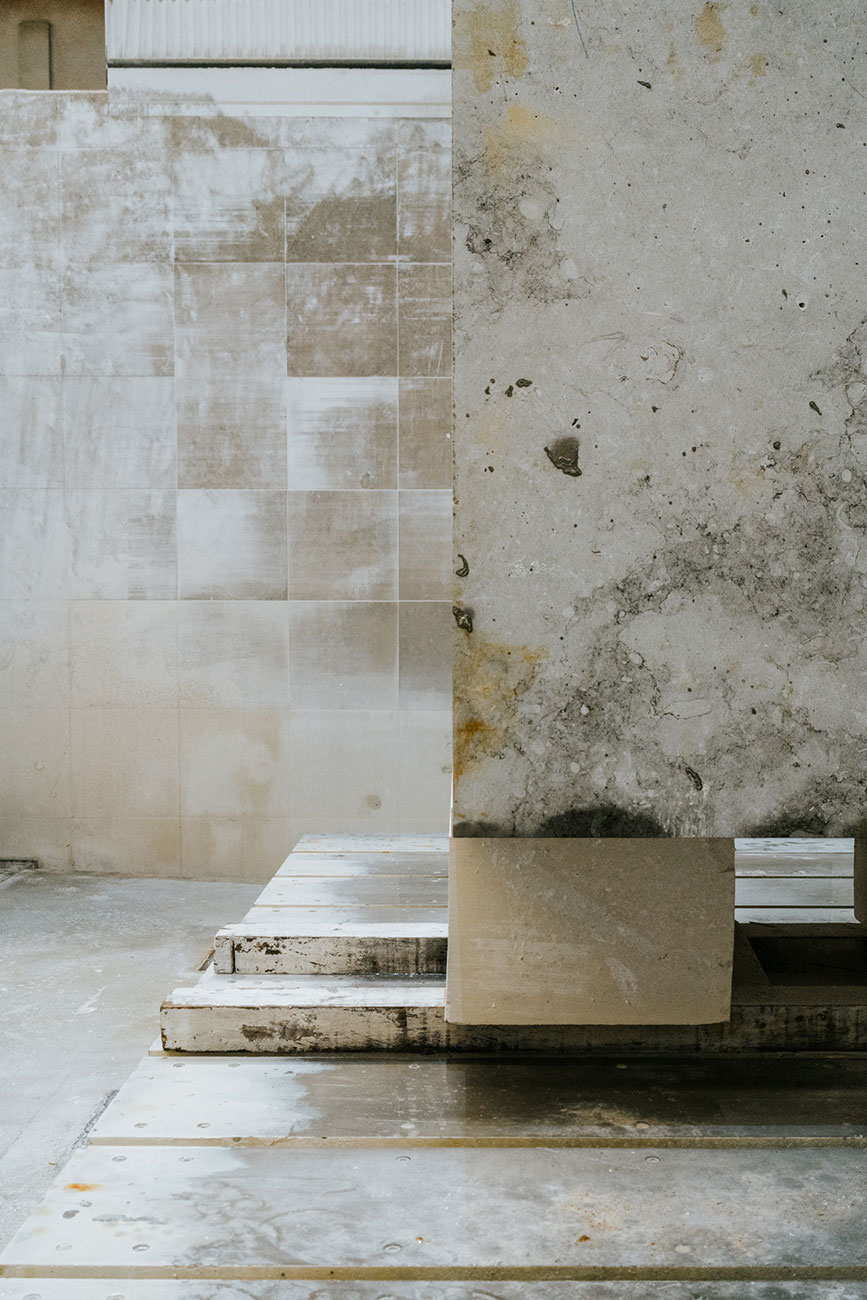 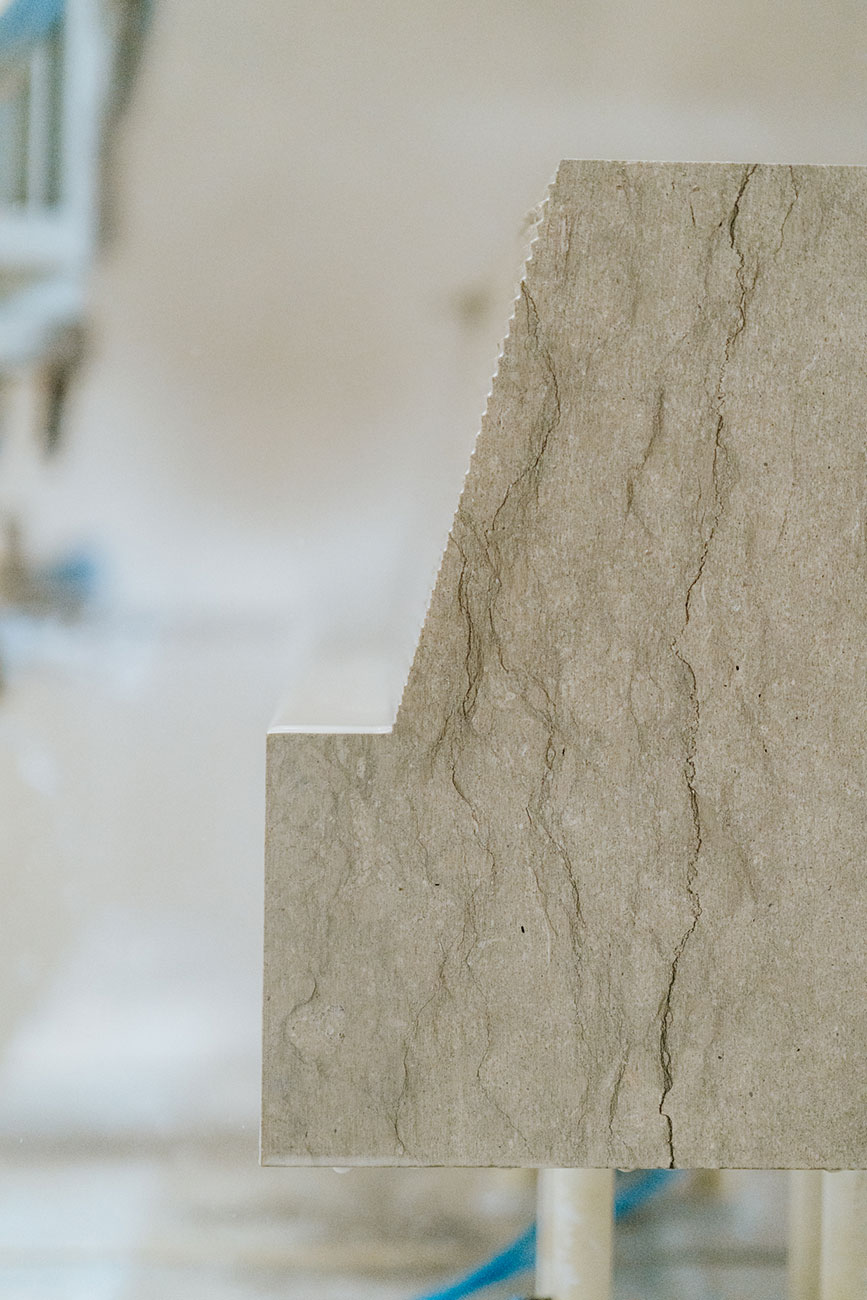 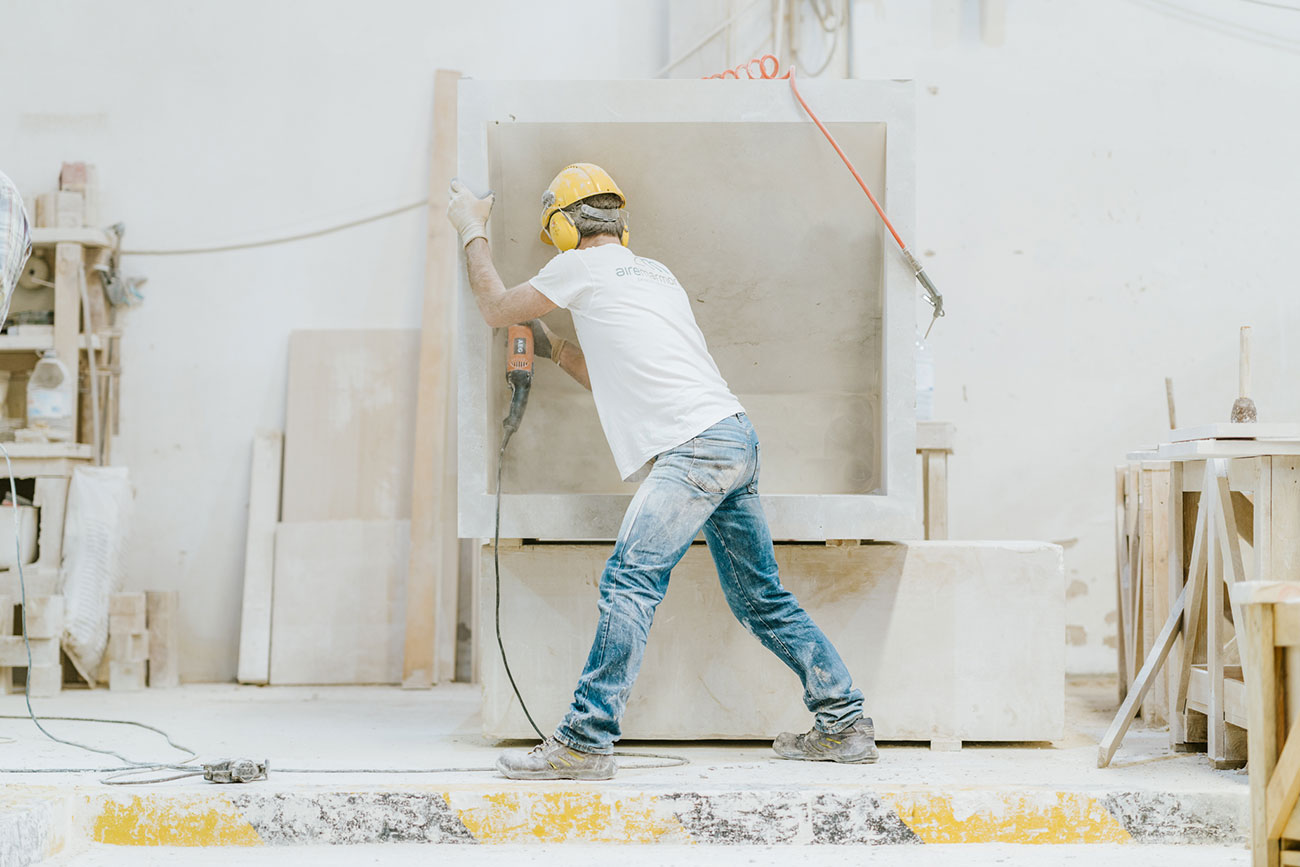 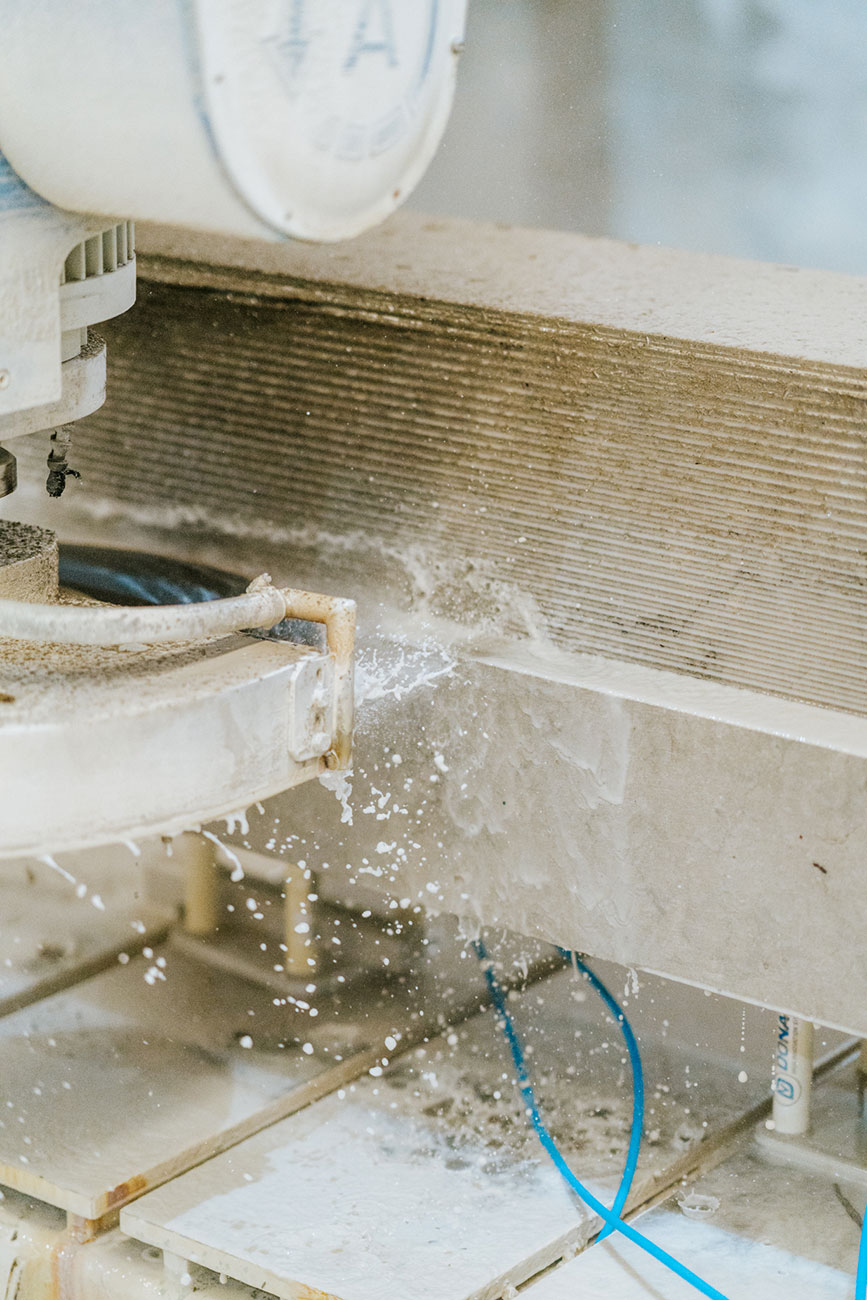 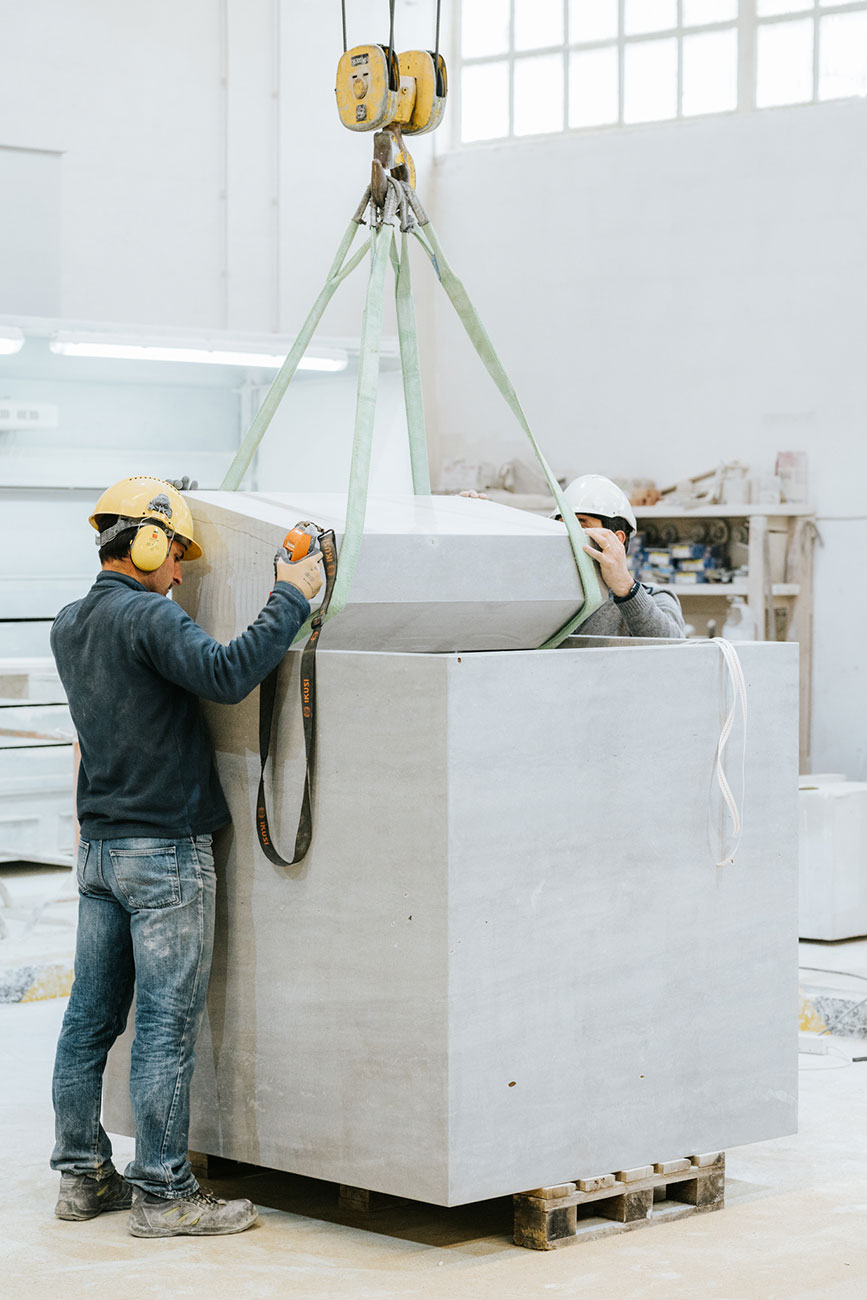 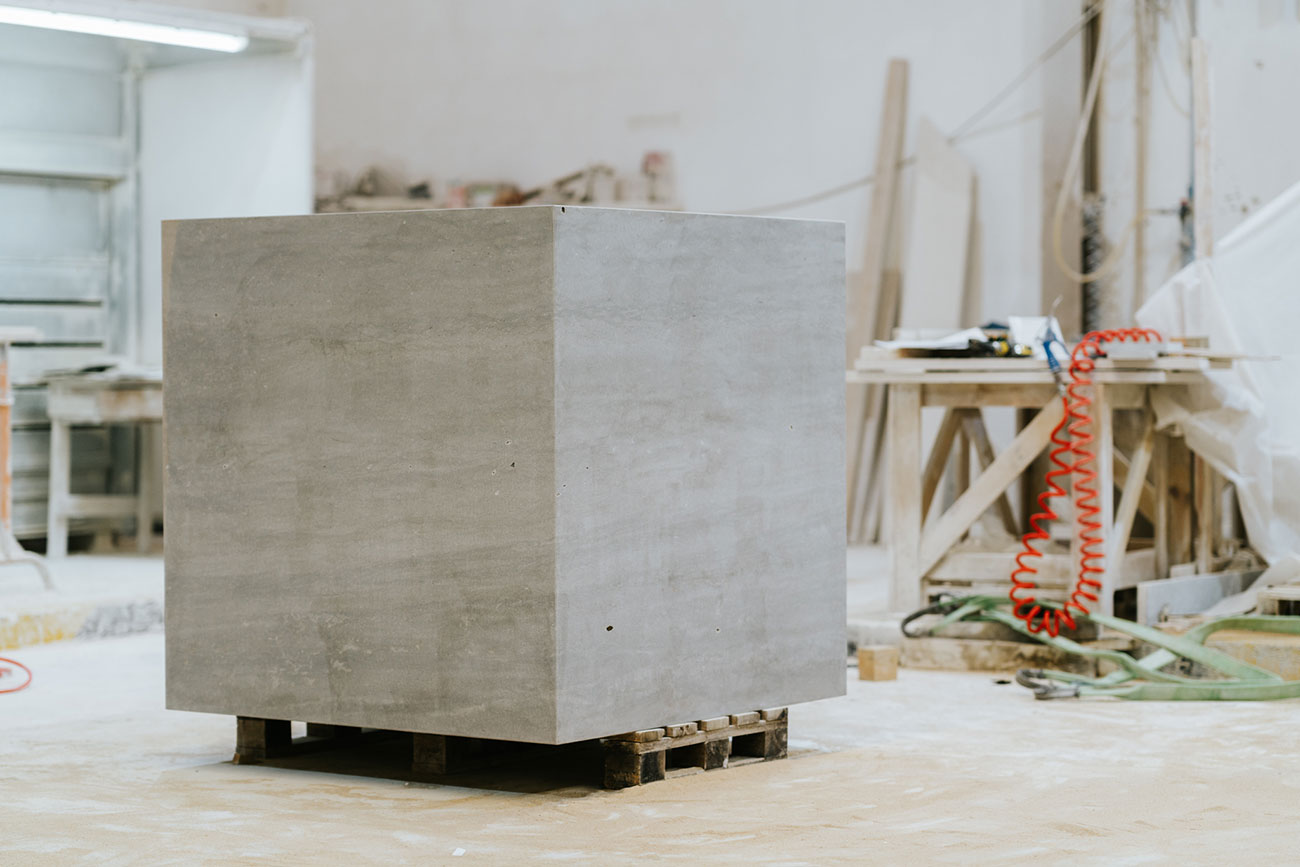 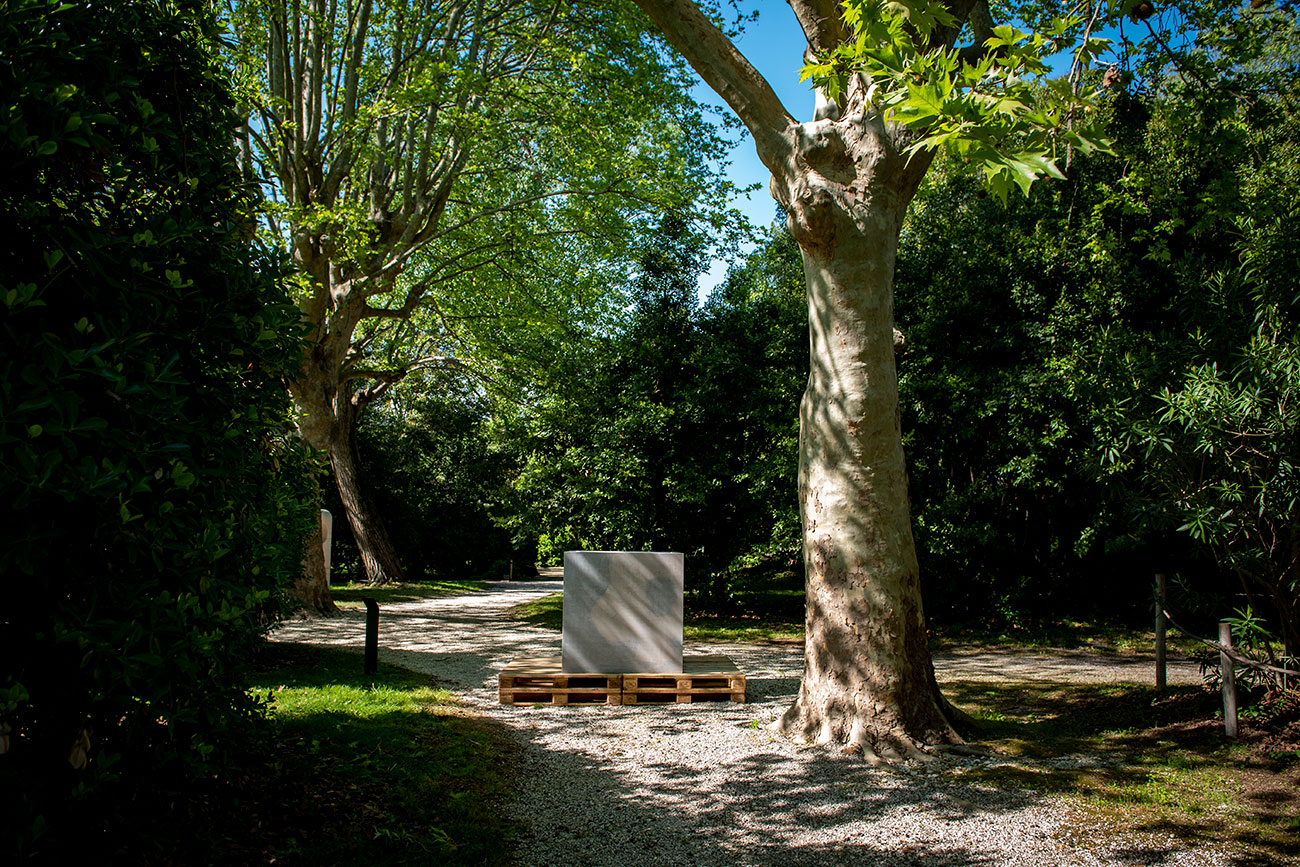 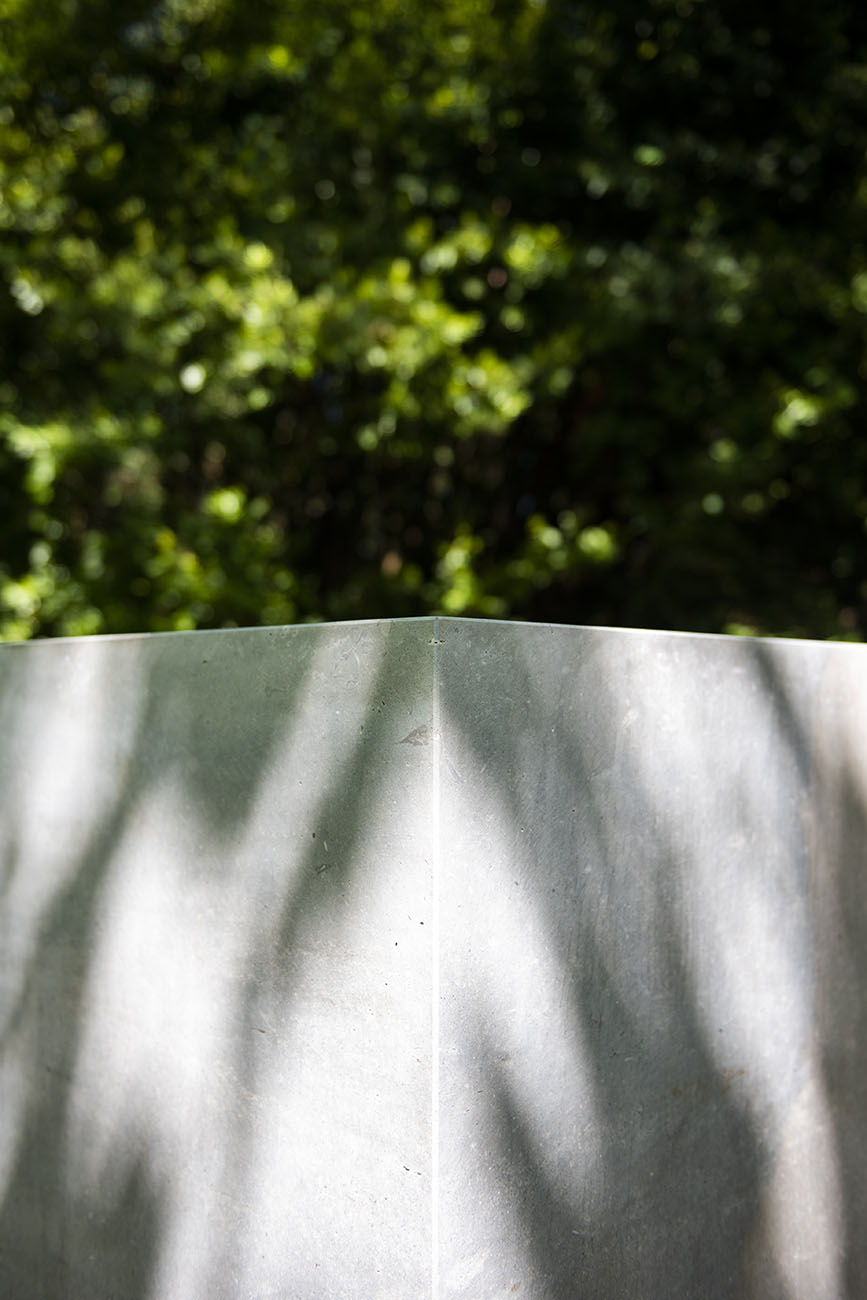 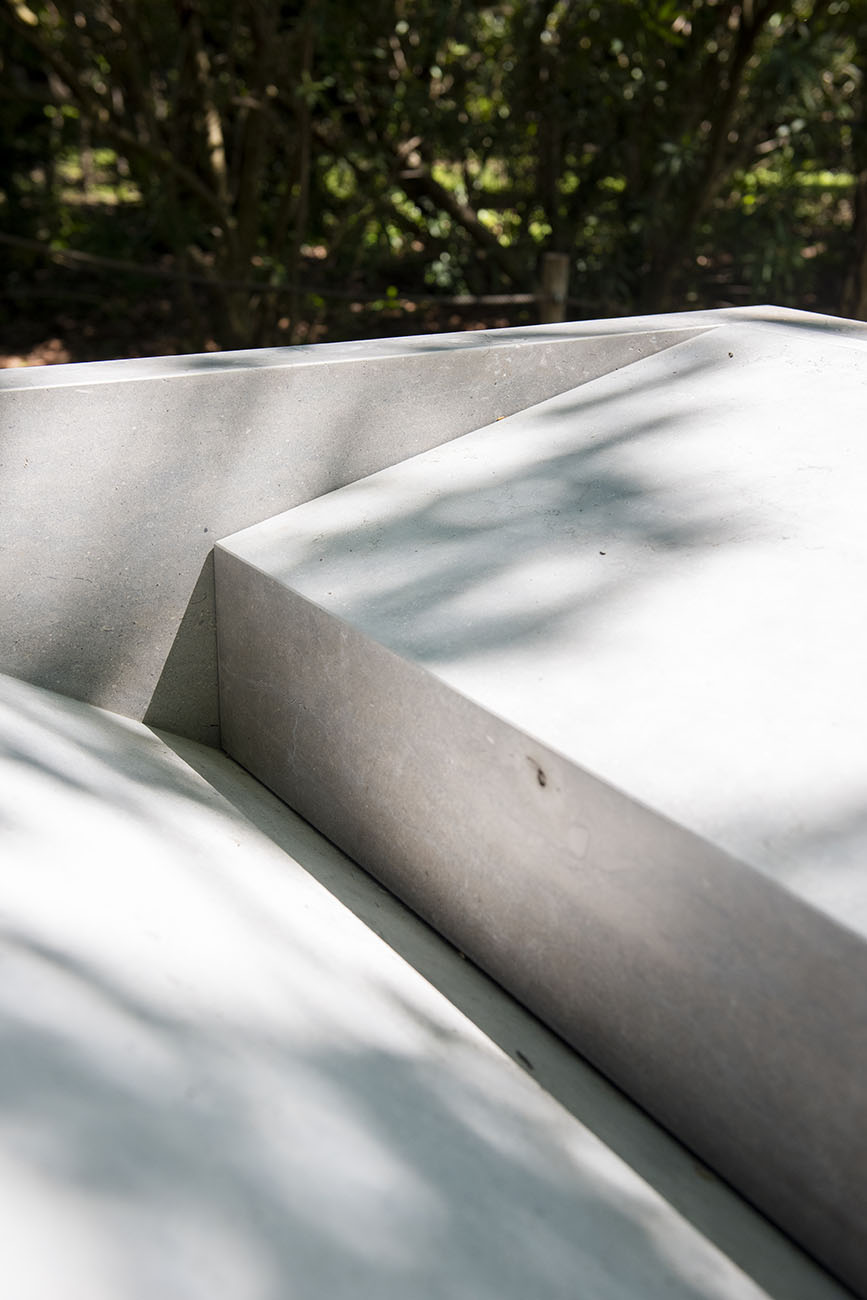 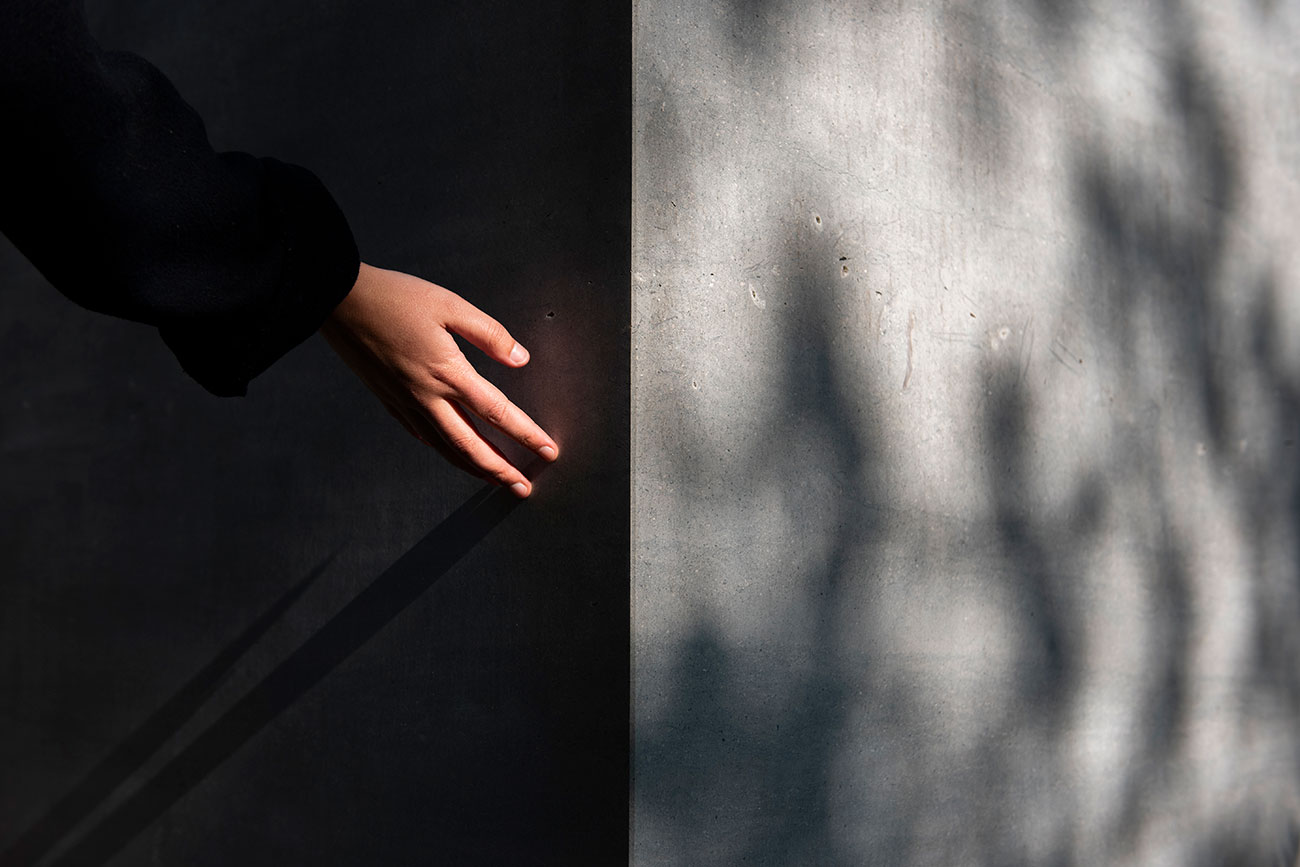 Julião Sarmento is an artist whose work interweaves his personal, idiosyncratic, literary, imagetic and cinematographic references with those of the history of modern art. Through a process of recollecting histories, references and images, his work operates within a permanent movement of revision.

The sculpture Sarmento created for the Expanded project arises from a very particular and specific discovery: the connection between a cubic Donald Judd sculpture and the iconic Cube Ashtray by Bruno Munari, created in 1957 for Danese Milano – which continues to produce it in its two original dimensions of 6 and 8 centimetres. In fact, the two works (in Judd’s case, the sculpture would be repeated in several shapes and materials beginning in 1966) are practically isomorphic, with the evident difference in scale between the object for use and the specific object, between the sculpture and architecture that inform Judd’s artwork. Thus, Sarmento has produced a cube that is formally similar to Munari’s ashtray, but has the same dimensions of Donald Judd’s first cubic sculpture, cast in a material that neither of them used – a limestone called “azul cadoiço” -, adding yet another semantic level to the history of the use of cubes in contemporary art: the piece rests on pallets that function as a plinth, conscious of the fact that Judd’s sculptural assumptions required the complete opposite, contact between the artwork and the ground.

The history of the use of the cube in American post-war art is marked by other iconic examples, such as Tony Smith’s Die sculpture (1962), a set of 4 mirrored cubes by Robert Morris (1965), the One Tone Prop (House of Cards) by Richard Serra (1969) and Sol Lewitt’s cubic structures. In all of these examples, the relationship with the ground is fundamental, for its rhetoric carries the dubious character that Tony Smith synthetically expressed when stating that the piece was not an object nor a monument.

Sarmento’s sculpture rubs salt into the wound: in that year of 1957, the same year Brancusi died, the synthesis of non-expression entered into objects through the hands of Munari. Whether this constituted a model for Donald Judd remains speculation. But the connection between functionality and phenomenological primacy, the dubious character between the object and the massivity of stone, presents a new narrative for the migration of the universes of art and design. 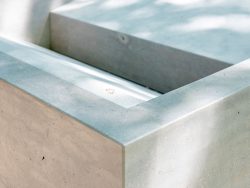